By Ernest Nyahanana in Dubai

Songs of Lozikeyi, a musical production staged by highly rated artists from Bulawayo – stole the show marking the Zimbabwe National Day at the on-going Expo 2020 Dubai.

Birthed at the Bulawayo Arts Festival 2021, Songs of Lozikeyi, received a thunderous applause from attendees from all over the world including heads of state and government, diplomats, visitors and other several performing artists.

Songs of Lozikeyi’s performance lasted only 40 minutes, but was enough to elicit interest from the crowd that reacted with ululation, whistling and clapping, while waving the Zimbabwean flag.

The performance comprised music, dance and a fusion of poetry.

Songs of Lozikeyi is a vivid music celebrating the life and historical significance of Queen Lozikeyi of the Ndebele State.

An initiative of Nhimbe Trust, Songs of Lozikeyi celebrates the powerful Queen Lozikeyi Dlodlo, senior wife of the great King Lobengula, and later Queen Regent of the Ndebele people; warrior queen of the 1896 Anglo-Ndebele war, champion of women and justice.

With vibrant performances in song, dance and poetry, the festival production featured 21 acclaimed artists of Bulawayo, working together to create a vivid musical tribute and celebrate the life and history of the great Queen.

Guided by the writings of acclaimed Bulawayo historian Pathisa Nyathi in Lozikeyi Dlodlo: Queen of the Ndebele and other research, the production was written by Noma Damasane (‘Lady Tshawe’) and Thabani H Moyo, conceptualised and directed by Phiri, with Josh Nyapimbi, Executive Director of Nhimbe Trust as executive producer.

Asked to describe the performance and how he felt about the show, the group’s artistic director Saimon “Mambazo” Phiri said: “Magnificent! Yes, this is what I was expecting.

“They did their best as rehearsed. I was a bit hesitant after we witnessed some of the world performances, but after they did a sterling job at the Angola stage, I was happy and confident that they could pull it through.”

Apart from performances by Songs of Lozikeyi on the Zimbabwe National Day, attendees had their share at the pavillion where there was an exhibit of Zimbabwean culture, heritage, tourism and business opportunities. 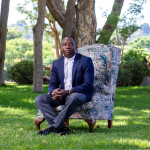 Ernest Nyahanana is a media entrepreneur. As the founder and publisher of Harare Magazine, his interests span from media, advertising and publishing. Ernest is grateful for the opportunity to lead and work with a talented pool of artists, writers, contributors and photographers who all collaborate to make the publication what it is today: Harare’s Leading Lifestyle Magazine. He is proudly committed to representing his country of Zimbabwe at home and abroad. A member of the Zimbabwe Association of Accredited Practitioners in Advertising, Ernest is testimony to the impressive ability of young Zimbabweans to create valuable companies that provide jobs and serve clients professionally and with integrity.